It seems everyone and anyone is going to Iceland and with so many package deals popping up and cheap flights, who can blame them? But, is it worth it?

I visited Iceland in 2015 with my partner, Billy. We booked a package deal with Clearsky Holidays which included flights, hotel, whale watching and a northern lights tour. We managed to get a decent deal but bare in mind that once you arrive, everything and I mean everything is expensive so be prepared to spend.

Reykjavik is a lovely town, lots of shops to wander in and out of and restaurants for a bite to eat. When we go away, we like to make the most of our time so we chose to cram as many trips in as we could which means we didn’t spend that much time in town, so I can’t really comment on where to eat/visit in Reykjavik.

We started our trip with a Golden circle excursion which stopped off at the Blue Lagoon.

The Blue Lagoon, you’ve seen all the Instagram photos but there’s something not many people realise. The Blue Lagoon is man made, this isn’t necessary a bad thing but it was something I didn’t realise when I visited. The water flows from Svartsengi Power Station next door and some of the rocks are fake. It always seems to be busy and we spent most of our time trying to find quiet spot to relax which was hard due to the coach loads of tourists and the construction noise from the building of a hotel next door. Was it worth the extortionate entry fee? Hmm debatable.

I understand the Blue Lagoon has become a ‘bucket list’ hotspot but if I’m brutally honest, save your money. It is just a glorified spa you could find in a half decent hotel down in Margate. 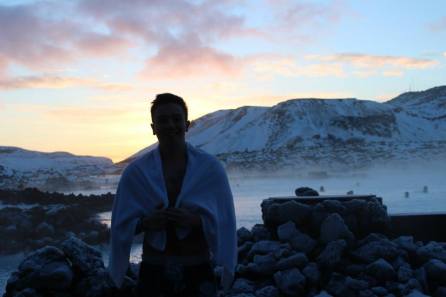 We jumped back onto our coach and headed to Gullfoss, a waterfall located in the canyon of the Hvítá river in southwest Iceland. On our way though, our bus came off the road and into the snow. Luckily everyone was fine, albeit a little shaken. We had another bus sent out to us to continue our journey, although we were now in a race to reach our destination before the light began to fade.

I would have liked longer at Gullfoss as it is stunning, but I guess this couldn’t be helped. The golden circle tour also included a stop at Þingvellir National Park, which is a beautiful place and a great photo opportunity. Our last stop was a geothermal area in Haukadalur, which contains the geysers. I have seen some spectacular photos of the geysers but I think we got unlucky as all we saw was a small spurt or two.

Something I would recommend is lava caving and Silfra snorkeling between two tectonic plates in glacier water. We booked the day with http://www.dive.is. They collected us from our hotel and we joined a small group, around 6, ready to start the day with snorkeling in Silfra. We were kitted out in dry suits and given a briefing, then we headed out. http://Www.dive.is mention how clear the water is, but you can’t quite believe it until you are there.

The water is so clear, you can see absolutely everything, up to 120m deep. You take a slow swim/float through the North American and Eurasian tectonic plates and guided through the four main parts. Once you’re done, you get changed and are given hot chocolate and cookies to warm up – perfect! When I tell people about this experience, the first thing they always ask is; “wasn’t it cold?” Well, yes, however once you are in the water, wearing your dry suit, it isn’t noticeable, I promise! It is actually colder out of the water, when I got out my hair froze.

getting ready for snorkeling 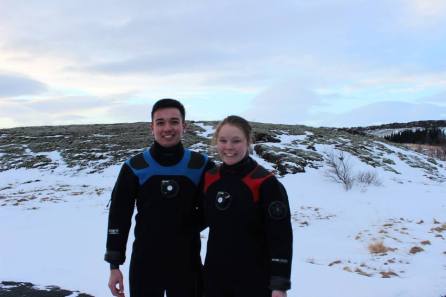 Once warm and refreshed, you take a drive to Leiðarendi cave. The guide kits everyone out and gives another briefing. In single file, you slide down the entrance into the cave, which is a whole lot of fun. It is steep and at times cramped. I’ll admit, I was worried I wouldn’t be physically fit enough to do it, but I did. I crawled, climbed and pushed myself and it was SO worth it.

Billy in the cave 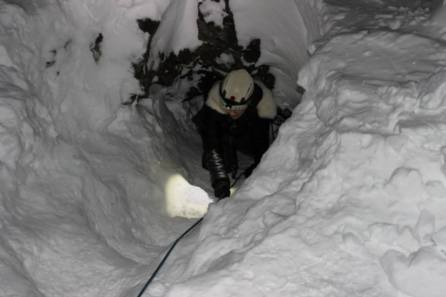 climbing out the cave

http://www.dive.is were a great company and I cannot fault them. The guides were friendly and knowledgeable. Yes, it was expensive. But this excursion was definitely worth it.

The next day, it was time for whale watching followed by a northern lights chase as included in our package deal.

I was so excited for whale watching after seeing videos and photos pop up on my feed. However, it was one of the worst experiences of my life. Now, I can’t fault the company (who I have forgotten the name of, forgive me.) It was no fault of theirs. The day was cold, damp and the sea was rough. We sailed around hours, shivering, staring into the sea. But no whales appeared. (Which I understand, cannot be guaranteed.) Overall it was a bit of a naff day, the northern lights will rectify this though surely?

The main reason we chose to visit Iceland, the aurora borealis. Our coach picked us up and we headed out. Wrapped up warm and crossing our fingers, we gazed into the sky. “There! Do you see what I see?” Our guided shrieked. Erm, not really, no. With a squint, one could say there was a blur of green. We were urged to set up our cameras and grab a shot. And we did. This is the result.

Taking high exposure night time shots is pretty tricky if you’re not a seasoned photographer with a fancy camera, especially if you don’t know what the fuck you’re doing. You see, taking night time shots of the sky requires opening the lens for at least 30 seconds to allow as much light to enter it. If you’re planning on using your phone, I wouldn’t bother. 99% of the time, the lights are not how you see them printed on postcards and that’s if you see them at all.

I have no doubt Iceland is a beautiful country and there are many sights I wish I could have seen. Although I felt misled by the social media hype and underwhelmed by my northern lights experience. I am glad I went but would I go again? Unlikely.